Sunlight and Powderhorn 2014-By Brian Smith

Ski mountaineer racing is now in full throttle as we are mid-season now.  Used gear has been sold, new gear has been bought and companies are running out of stock.  The local town series races at CBMR will have their last morning event this coming Saturday, (a team event). The last two events will be in the afternoon given the longer daylight hours. Even though we are still seeing the sub zero temperatures in the mornings we are getting mid 30's by mid-day.  A sign that we are moving into the later half of winter.
I have now competed in 4 COSMIC events: Wolf Creek, Irwin, Sunlight and Powderhorn.  My results have improved with each event and I feel I am on track to claim a national title in March.  My last post covered WC and Irwin so this write-up will cover Sunlight and Powderhorn.
Unlike last season at Sunlight with a humid and extremely cold sub zero start we were greeted with 20's and sunshine.  Team GO-CB made the drive in the am leaving Gunny at 2:30am Saturday morning due to a long day of driving with FedEx Friday.  With the exception of the Dorais brothers and Tom Goth from Salt Lake most of the heavy hitters made the start including the undefeated John Gaston.  The start was fast as usual with Simmons, Marshall and myself setting a quick early tempo to separate the field.  At the top of the first climb, Marshall was breaking trail at a comfortable pace and had a group of 7 from behind regrouping!  At the top of the second climb was the same scenario leading to a boot pack. After a good steep/technical descent down the Heathen we hit our last skin/boot pack.  There was a lot of shuffling with crashes and skin failures leading to the boot pack but at the top is where the final selection happened.  John took the lead and made a huge effort to drop Marshall and I.  Marshall clawed back soon after and I managed to make contact a few minutes later.  One last trail break near the summit brought the pace to a screeching hault and caused a furious scramble to the final skin strip.  John was quickest leaving 1 second in from of me.  I was about 2-3 seconds ahead of Marshall.  Somehow I never made it inside of John's slipstream as he tucked to the entrance to the Heathen.  John was quick to drop in and carried his speed to the catwalk at the bottom.  I had a brief pause to make sure I was headed the right direction at the exit and that was it, 11 seconds.   Marshall 3rd, Tamm 4th, Brown 5th and Wick 6th.  For the women, Stevie Kremer was 2nd as well only 11 seconds behind Sari Anderson.  The real killer was the $500 payout to the men's and women's winners only.  Oh well, that's racing and John earned it.
The next weekend would be Powderhorn.  Another weekend of warmer temperatures and rando fun.  John Gaston was unfortunately sick and did not make the trip.  Teammate Bryan "Wick" Wickenhauser couldn't make the trip either due to work/family commitments.  We did however have 2013 national team member and Grand Traverse Champion Tom Goth from Salt Lake. With Simmons and Thomson in attendance as well we were looking at another barn burner start.  Simmons, Goth and I set the tempo early with Goth doing most of the work. Simmons was having skin issues on the first climb and was out of the picture early.  I stayed glued to Goth on the second climb and Marshall was dangling off the back. On the last climb Marshall took up the lead and launched his first big effort.  Goth was gapped immediately and I passed when Marshall was up to 10 seconds.  After 5 minutes in the pain cave I bridged back to Marshall and stayed with him accross the top to the final skin strip.  I had a couple seconds on Marshall heading out.  I stayed pinned down cannonball to the last pitch where I lost pin flagging.  When I saw the paint in the snow down the last pitch I pointed it.  This time I was the one on the top step with a 12 second gap to 2nd.  Goth finished 3rd about 2 minutes back.  Max Tamm was 4th and teammate Jon Brown was 5th.  For the women Stevie returned to the top step with a win ahead of Sari this time.
Team GO-CB continues to race the: Ski-Trab Gara Aero World Cup ski with Trab Attico Race bindings, Ski-Trab world cup vertical carbon poles and SCARPA Alien 1.0 Carbon boot.  The Gara Aero WC ski is much more stable with the Attivo dampening and wider tip with a new early rise.  All gear has been rigorously test by the team and has more than met our expectations for a top race set up. 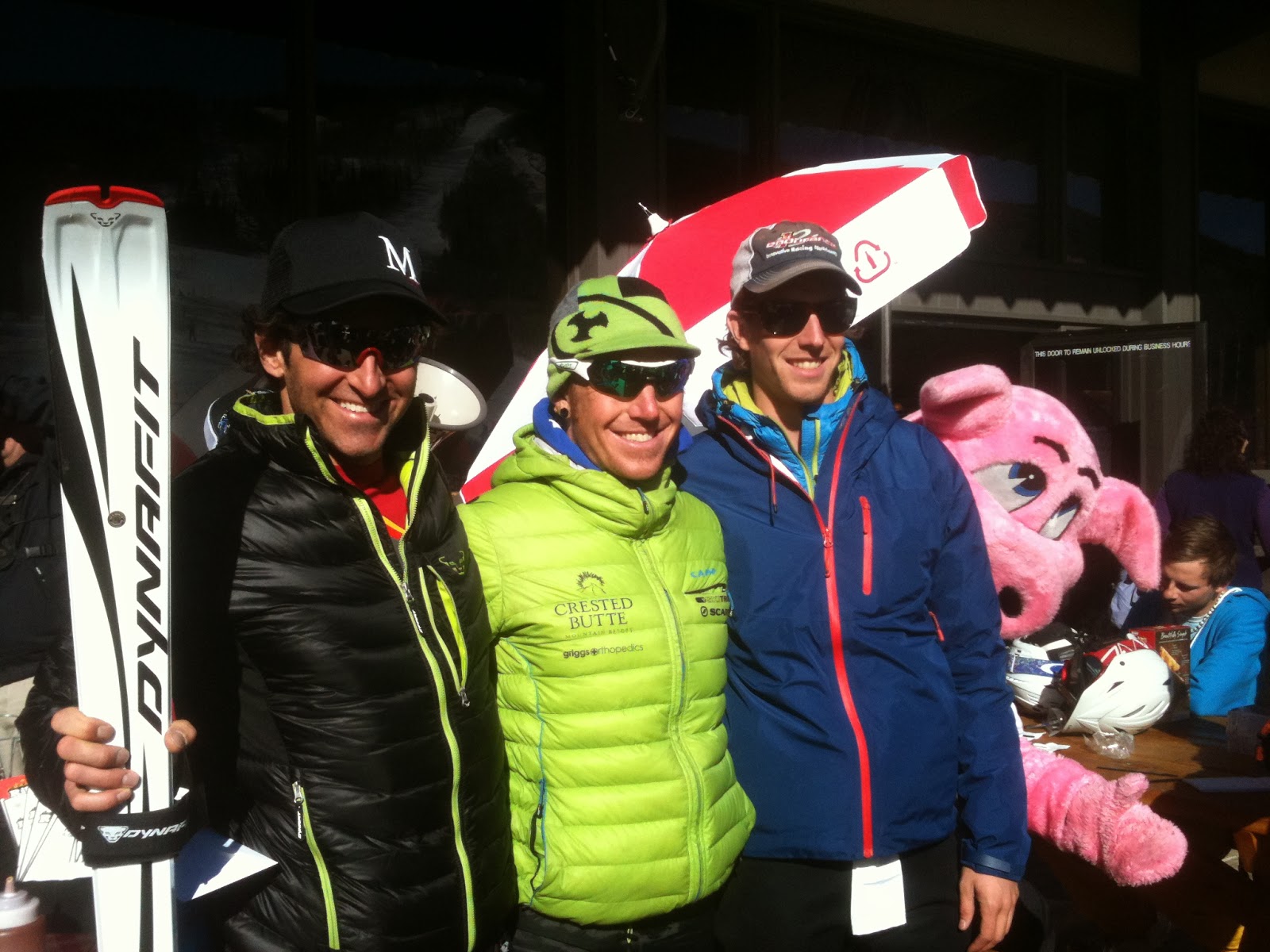 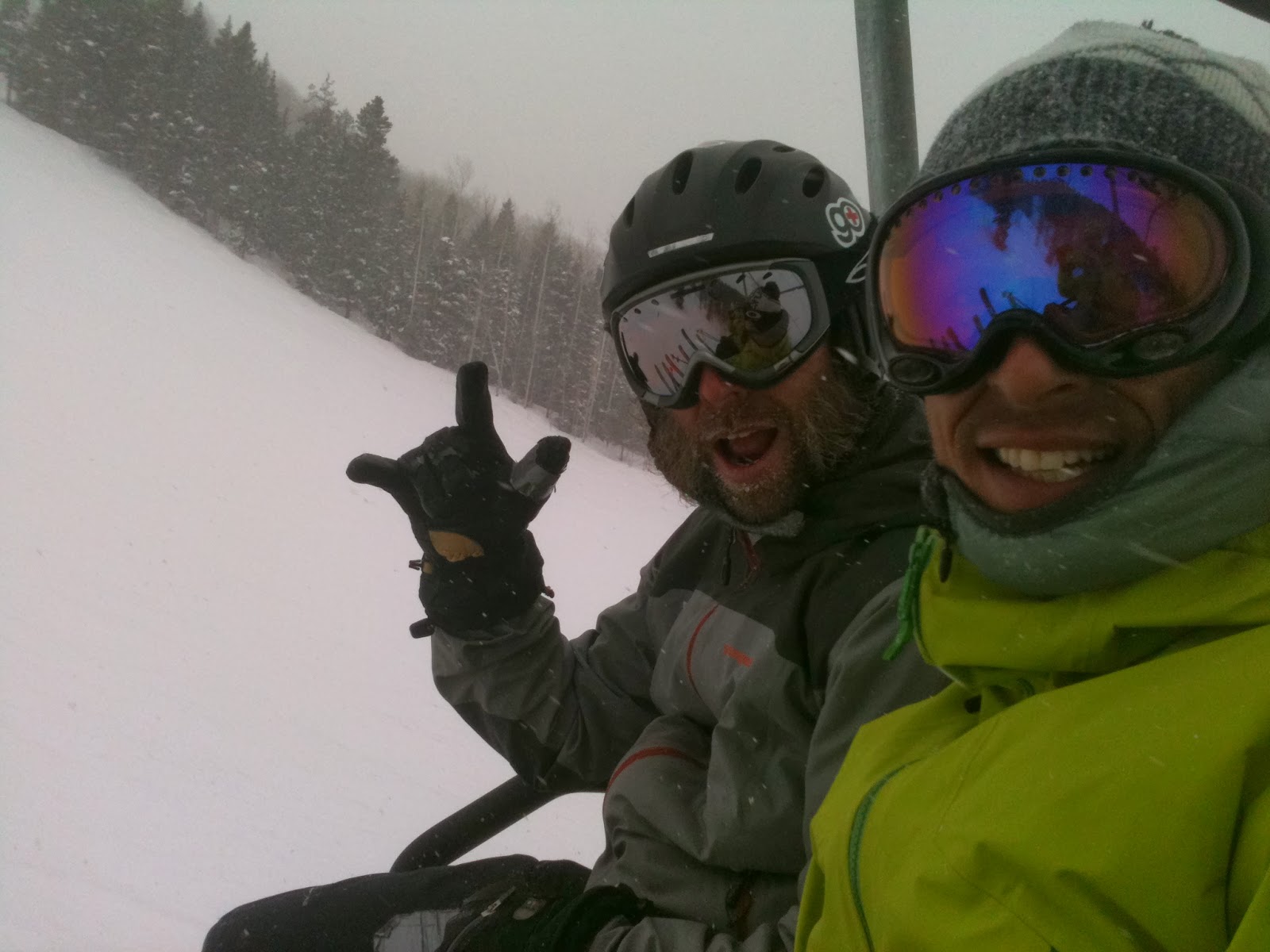 Next weekend is the Town Series Team Event on Saturday with the Alley Loop Nordic race a week later. I am thinking of throwing my hat in the ring for the 42K skate race again for training.  Thank for reading and pray for snow!
Posted by Team Crested Butte at 6:23 PM