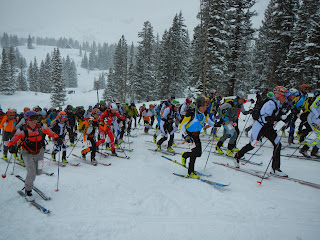 Saturday December 7th 2013 was the 3rd annual COSMIC ski mountaineering event presented by La Sportiva.  Last season the event was cancelled due to lack of snow and the late season reschedule was cancelled due to a lack of pre-registered athletes.  This season we have had great consistent snow since early October with a good 6-8 inches falling earlier in the week.  The event sold out and racers were scrambling to get sleds for rides and tows to make the 10am start.  70+ athletes toed the start line and skinned to Scarp Ridge.  Even with the course being set the day before, the track was filled in near the ridge due to wind and a storm cycle that moved in race day.
2013 Grand Traverse champions Marshall Thomson and Tom Goth set the early tempo.  Last year's national champion Jon Gaston and I were tucked in behind.  Jon took a good crash on the first descent and fell back from the lead group.  Max Tamm who was closing in by the top had caught us and crushed the downhill as usual and we had 4 together again before the second climb.  I had a great transition and opened a gap heading to the boot pack section.  I caught the trail breakers unfortunately and by the top of the ascent I was caught by Tom and Marshall.  Max again came from behind and blazed by all of us with another amazing descent.  Marshall took some big crashes and was out of contention before the last climb. 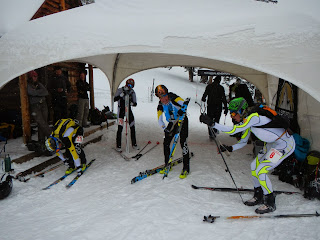 Tom had the best transition and lead the way.  As I started up I noticed my poles seemed long and my straps were tight.  Tom pulled out and I led for another 5 minutes and I pulled out.  Jon then took over after making up a lot of time after crashing.  I kept Jon in check to transition but was completely red lined.  I had about 10 seconds to make up to take the race but took a huge crash on the last descent landing inverted in a tree well.  I manged to get my skis facing downhill and came out on the cat road about 2 minutes from the finish and saw Tom just in front having issues skating.  I went by him quickly and sprinted to the finish, taking second by about 5 seconds.  Jon was only 30 seconds in front as well.  After finishing the race I found my poles next to Tom's skis.  I was able to beat Tom in a skate with his longer poles!  Still a bit dumbfounded by the pole switch.
After the Wolf Creek race two weeks ago when I didn't have the fitness to stay with the leaders I fell I am now competitive with the top athletes.  I am looking forward to stepping it up one more spot to take the win at Sunlight next month.
Posted by Team Crested Butte at 9:18 AM