The COSMIC event at Crested Butte Mountain Resort has had many changes over the past few seasons.  Last year the event included a very technical ropes section called the "Guides Ridge".  In addition the event was doubled as a COSMIC event and was also the North American Championships.  We had another very low snow year as we did last season and couldn't use the extreme areas for descents.  In addition the Guides Ridge was pulled from the course as well.  Race director Bryan Wickenhauser and CBMR managed to make a longer and quite technical course using Snodgrass Mountain and skinning up the extreme runs on the mountain.  The final course covered 17 miles and 6800 vertical feet of elevation gain. 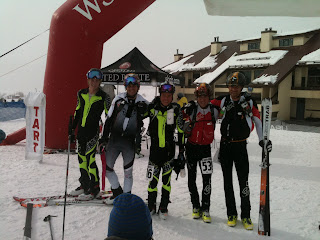 Race day was not a typical one at the resort.  There were low clouds and temperatures in the mid 20's.  Many racers chose to use high-fluoro wax on their skins for better glide in the wet/warm conditions.  The race started at 8 am at the base area.  We gained warming house hill and then ascended columbine hill to the top of the Gold Link lift.  The low cloud cover made for very poor visibility with flat light.  Scott Simmons and I pushed the pace up the first climb and I was first to descend to the maintenance building off of Gothic Road.  When I started to take my skis off to re-skin for Snodgrass, the toe piece on one ski was jammed.  I initially thought it was snow/ice under the binding until my body weight would not release the spring.  After forcefully hammering on the binding it eventually released.  I found a piece of plastic under the binding that came free with my pole tip after working on it for a while.  When I went to to re-tension the toe piece the lever flopped back to the ski.  The toe lever had gone past the tension plate under the binding when setting the tension at the start of the race.  When I went to release the binding it caught the plate and bound-up under the binding.  I set out to make up lost time, about 2-3 minutes.  After about 5 minutes I had caught Max Tamm and pursued the top 3.  By the top of Snodgrass, I had made contact with Marshall, Scott and John Gaston.  On the descent, Scott took a big digger on the way down but recovered quickly.  After transition John took off with Marshall and myself close behind.  I overtook Marshall and eventually John on the ascent back to the top of Gold Link.  After descending to the base area the top 4 were all back together.    I didn't expect any positions to change as we had a big gap on Snodgrass.  By the time we topped out on the  Upper Peel, Max Tamm was back with the group and charging.  I had dropped behind Marshall and John and then Maxx at transition.  On the climb up Headwall, that included a boot pack, Max moved past John and Scott overtook me as I was running out of steam.  The top three were out of transition heading up Teocalli Bowl as Scott and I arrived.  On the ascent, Scott started to fade and I made a pass about halfway.  I charged the descent full throttle and was the first to skate to the finish.  I finished over two minutes up on Scott and less than 3 minutes from the winner.  Max Tamm took the victory, beating the national champion and undefeated John Gaston.
The winning time was 2:54, with some of the full course racers taking 4-5 hours.  It was a great mix of backcountry skinning, steep technical skinning and 2 bootpacks.  It was the best possible course the mountain had to offer given our lack of snow.  I really look forward to tackling the Guide Ridge next year and hopefully we can have descents on the Headwall and Northface.  If we can pull off the whole planned course it will be a world class ski-mountaineering event.
Next stop for Team Crested Butte is the Teva Winter Games with a long backcountry ski-mountaineering event on Saturday February 9th.  Jari and I will be competing in the Ultimate Mountain Challenge.  The event consists of a 10K skate race on Friday, the ski mountaineering event on Saturday and the Vail Uphill on Sunday.  I won the overall last year so I am really excited to defend my title next weekend.  Thanks for reading and stay tuned for more podium finishes from Team Crested Butte.
Posted by Team Crested Butte at 4:09 PM