It took 7 months of planning to put this event on ....and please excuse me if it took a bit to file this post race recap :)

The Crested Butte Nordic Center took over the reigns of the event this Summer and our goal was to only enhance the event, and too that end I think we achieved our goal.  We had a great team to pull it off, and clearly Jalene Szuba (my Co-Race Director) did the heavy lifting, as I was more of the "idea guy".

Where do my "ideas" come from?  I am able to draw on my many years of adventure racing and Skimo racing over in Europe, where both of these niche sports thrive.  The Euros were arguably the birth place of these sports, much like soccer, etc.  They have the passion, terrain and history for pulling of amazing events within these sports and I would love to see the greater Rocky Mountains begin to show off their terrain.

Now that I am involved in the Grand Traverse as part of the race committee, I have an opportunity to do so.  I hope everyone that raced, enjoyed the experience, as I am clearly thinking of all of you when I came up with some of the concepts we implemented in this edition (more enhancements to follow!)

Now on to the race itself...

I am clearly, lucky enough to have the fastest teammate in North America as part of our one-two punch that is Team SmithWick....Brian Smith.  The kid wins nearly every event he enters, and if he doesn't he goes down swinging!  That's one of the things about the Grand Traverse (GT) that is so cool to me, its more than any one individual, its "how does the TEAM work together to get to the finish line in Aspen", that separates the winners. 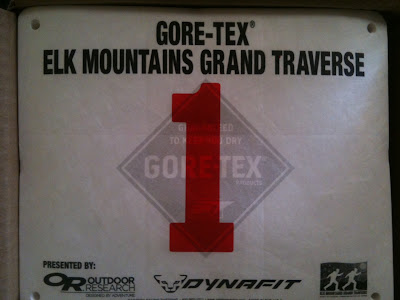 The sport of backcountry skiing should almost always be done with a partner for obvious reasons and we try and replicate that concept with this race.  The GT travels over 35+ miles off any ski resort, so the need for safety alone, requires a partner.  No other skimo race in North America can say this, that's one of the reasons it is the jewel of skimo racing in my mind.

Brian and I this year were on the lightest gear possible thanks to our sponsors and chose to do any and all running on bare ground (about a total of 90 minutes cumulative) in our SCARPA Alien carbon boots.  Our CAMP Rapid 260 packs were under 9lbs (dry) and have the quickest ski caring system know to man (which was key this year with all the lack of snow). We wore our water bladders on our chest, along with all our food and skins in our CAMP race suits to help "balance" the load, this allows for easy access to those things you need the most. If you have to stop and get an item thats in your pack during the race, you are losing time!

About 25 minutes into the race we developed a gap on the rest of the field as our top competitors stopped at the first sign of bare ground and changed over to trail running shoes (and put their boots on their packs).  They eventually caught us about 45 minutes later, but we again passed them as we reached snow line again and they had to stop to transition back into ski boots.  This running in our Aliens was fine for us as it was a "fast shuffle" if you will, the boots are terrible light, with great ankle articulation and have amazing toe protection when kicking rocks in the dark (SCARPA's best trail shoe? Ha!)!!

As the race went on the top three teams reached the Friends Hut in three hours and thirty minutes.  In that time I drank about 25 oz and ate at least one full PB&J and two Gu's. From here teams climbed up to Star Pass for the first major downhill.

Brian & I ripped our skins and descended 1100ft or so, into the abyss with wild abandon.  The snow was supportable crust all the way down.  We both grew up alpine racing so we felt at home here...plus we've done the GT 24 times combined, so we knew what we were getting into.

At the bottom where we put our skins on to being the climb to Taylor Pass, we looked back and saw headlamps just beginning to drop in to the bowl so we estimated we had a 3-5 minute gap and that's all we need to see...we weren't going to lose this gap!  It was like hungry lions seeing a weak gazelle.

We both ate and drank a bit more as you still have a long ways to go (clearly about another 3.5- 4hrs or so to the finish).  The tow line came out at this point but it never really got used too much as Brian & I operated in a similar rhythm.  Its really psychological more than anything...if your partner is 100 ft ahead the whole time, it can drain on the slower person mentally.  Use it people, "you are only as strong as your weakest link"!

Arriving at Taylor Pass we were cruising on a firm, re-frozen crust making great time and enjoying the mild temperatures, with little wind...perfect conditions!  After leaving the Taylor Pass checkpoint we looked back across the expansive terrain and felt we could see the 2nd place headlamps, and estimated a minimum five minute lead, still doing well in our minds!

Going up the first of three climbs to Barnard Hut, we encountered tons of dirt and just skinned over it, as the mud was frozen.  At the top we ripped our skins and flew downhill and repeated the skin up/ski down process two more times as we "hauled the mail" into the Barnard Hut checkpoint.  Here we encountered the mandatory 10 minutes rest.  All Brian & I could wonder is "where is 2nd place"?

We ate/drank and stayed warm, and at the end of the 10 minute rest, as we pushed out for the last section to the finish line in Aspen, no teams were in sight!  We felt pretty confident that we had this one "in the bag"....our lead was growing and we were pumped.

This last section can be a "back breaker" for teams.  The terrain is undulating, with whoop-d-dood out snowmobile tracks all over the place.  Inexperienced racers are often left wondering, where to put on skins, where to boot pack and what is next around the corner.  Top racers will usually cover this 11mile section (condition dependent) in about 1.5 hrs...with the last 5 minutes being a down hill on Aspen ski resort.  Brian & I clearly found the conditions to be very fast, and with the shallow snow pack this year, the whoop-d-doo's not being a factor.  I puked twice on this section but with Brian ahead motivating me, we covered this ground in near record breaking time of 1hr and 11 minutes (still not sure how we/I did it that fast).  We skate skied the entire section, except for one long hill early on that we chose to skin up for.

At the Finish line in Aspen the finish line crew was clearly shocked to see us 6:32am!  The finish line arch still wasn't up (who could blame them!) but they and us, were full of emotion.  We celebrated and got changed into warm clothes for sun rise.  The 2nd place team (and our close friends Sir Pat O'Neill and J. Marshall Thompson from CB) came in second about thirty minutes later.  Brian and I are still in disbelief as to how we increased our gap over the last 11 miles.  Third Place went to Chris Kroger (Jackson Hole) and Scott Simmons (Durango), also close friends of ours.

All in all a great race effort by Brian & I but more importantly....I didn't hear of one complaint (OK maybe the Final Results took too long and the SPOT Tracking devices were not functioning well)....that made me happy as Co-Race Director!

The Race Committee will dial it in even tighter next year, and Smithy & I will go for the repeat!

Great photos can be seen here on Ted & Christie's Stuck in the Rockies
Posted by Team Crested Butte at 10:10 AM