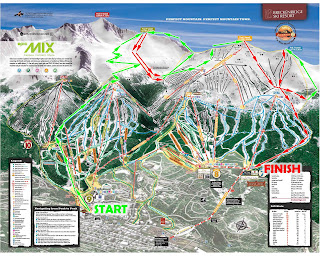 Ski mountaineering is often considered an individual pursuit, but for safety reasons it is best to go at it with a partner who shares your same sense of risk versus reward. It can also be more fun. The right partner can create a team that is much stronger than the sum of its parts. So it was fifty minutes into the Breckenridge Five Peaks skimo race in 2011. I was sure I had this kind of partner and I was confident we would win this race.
Mike Kloser is a rival and friend and both interpretations of our relationship are equally accurate, just pick the day. I have chased Kloser on a bike for more miles than I care to count, often coming up short at grand scale events like adventure racing world championship races. But let’s not talk about that. My hands are starting to clench and I feel the veins in my head beginning to bulge. Breathe. Exhale. Okay.
On the flip side, I have found myself grinning in solitary satisfaction as Mike has taken his place below me at some of North America’s most challenging ski mountaineering events like the Elk Mountain Grand Traverse. Of course even here, I have watched Mike ascend the podium one step higher than me.
In short, Kloser is my nemesis and anyone versed in epic tales and classic comics knows that the power of the protagonist combined with the power of the nemesis produces an unstoppable force. This is why we chose to link up for the epic Five Peaks race. To crush the competition with a combination of skills, gumption and raw physical power that would be unstoppable. Okay, we are also friends. But this is really beside the point because neither of us is tending to a friendship while we are racing. We are there to WIN.
We summited Peak 9 in the Ten Mile range in first place, battling the elements on what was hailed to be a ‘Spring-like’ day. In Breckenridge, this can mean colder than nude polar bearing in the arctic and today the moniker of ‘Breckenfridge’ would have been easy to wrap my head around if it weren’t numb. But the elements aside, I was racing with Kloser and we were pushing each other with the same momentum of a spinning coin, two faces reversing position as they race in combined unity towards the destination.
As I raced down the first descent on wind hammered Sustrugi snow, I found myself drifting into a tail spin.
‘What the hell is going on,’ I thought, ‘I am a solid downhill skier, this cannot be happening.’
I yelled across the slope to Mike and told him to keep going as I picked myself up off the piste. I watched the second place team from Aspen pass by as I gathered my wind-milled effects to continue the descent. That is when I noticed the crack behind the heel piece on my right ski. Not a small crack either. It would for sure deteriorate to the realm of unusable if I kept pushing it. Frustrated, annoyed (the two worst emotions for an ambitious person to feel), I am ready to give up. It is my partner who puts my will back into position. He says nothing, simply stares, waits, understanding, driving. In his eyes I see the mutual chord about to be struck. It is enough to simply think back to the epic battles in the field of adventure racing where the teams and racers who manage diversity the best, win. This is an area where Mike is the master. When the going gets tough they say. An adage I have known Mike to embody since the day I met him.
The goal becomes clear. Punch it with reckless abandon until the ski breaks completely. This means a total disregard for pacing and strategy. It is balls to the wall as long as we can keep it up or until the ski snaps. In the back of my mind, I am sure the second possibility will occur first and this is part of the driving force behind this new strategy. The pain can only last so long before the ski grinds us to a halt. 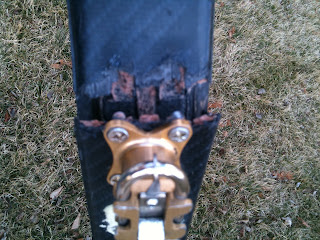 With this new strategy, I was surprised to see us swapping leads with the Aspen team. They would obviously pull away in dramatic fashion on the descents. In a similar fashion we would claw our way back to them on the climbs. But, sadly, the writing was on the wall. Without being competitive on the descents we had no hope of ultimate victory as the course finished with a long, technical descent off Peak 6. 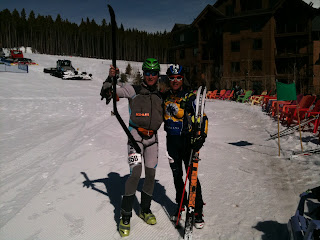 Second place is losing no matter how you slice it. But we are flying high in morale. These are the kinds of epic mishaps that lead to breakthroughs in our understanding of what is possible. I learned two things from this race. First, Kloser is a killer partner. Second, short of an act of god or turbo challengers from overseas, no one will be able to stand in our way if we have the opportunity to team up again in 2012. No one!
Posted by Team Crested Butte at 10:59 AM