The Story Behind the Teams Race

Yesterday (Sunday) was the first day of racing after the reschedule of the Sprint Race to Wednesday.  The teams were laid out as follows:

Men:
Pete/Luke
Wick/Chris
Max/Travis
Scott/Greg
The conditions would best be described as thin and firm at or below tree line and slightly deeper and softer above tree line with foggy/poor visibility...very challenging basically.  Since there are no ski lifts in the area for 20Km, the race started right out of town...they were actually trucking in snow to town with LOTS of course workers with shovels all over the place down low.  The finish was going to take us through the lower valley crossing through multiple cow pastures, over stone walls & bridges back into to town....basically the Alley Loop course with 2-4" of snow coming back from Gunsight Pass back onto the Nordic Center trails (but very thin and poor snow conditions....).

I was paired with 3X US Ski Team member Chris Kroger (a ski patroller at Jackson Hole).  We had a great start and with in the first minute he walked right out of his "toe piece" on his Merrilli ski binding....I kept going thinking he would jump back in and be right on my tail....needless to say I never say him for 4 minutes.  The route up turned to a a boot hike through the woods as the snow was THIN!

They wouldn't let me start the boot pack until he arrived...unfortunately Chis gave me the news that he had walked out of his tow piece 5-7 more times...obviously something was wrong with his binding.
At the top of the boot hike we jumped into our skis and began skinning for another 8-12 mins where he proceeded to walk out of his bindings 8-10 more times...at the top where we ripped our skins we decided that this was a total equipment failure and "threw in the towel"....

Last year unfortunately my partner had a similar issue with his carbon fiber boot blowing up and having to "limp through the rest of the race".......I'm really beginning to feel like the teams event has hexed me!  I feel unfotunate as this is always one of my best chances, everything being equal...

The gear that is coming from all these new manufacturers like Merrilli and Pierre Gigounoux (amongst others) is very delicate (....and some might say unproven) gets stressed and tested at the mercy of top athletes only to have equipment failures during high profile races is too common in my mind....but thats the price we pay for being "guinea pigs"...

The Mens race was won by the Italian in 1st & 2nd and 3rd were the French who were relagated to 3rd via  a protest by the Italians (who won the protest).  The top English speaking team was the Canadians who took 16th, followed by Pete/Luke in 19th and Max/Travis in 20th, and Scott & Greg in 22nd.

The women's race will be written in better detail by Jari soon but....Nina/Janelle in 8th and Jari/Jessica in 11th...more equipment failure there for Jari....I'm sure she'll give you the details.

The team was generally excited but "worked over" from the racing...very warm and humid caused many of the team members to found that they required a lot more in the way of fluids compared to back home....and one or two more "Gu's" for energy.

Today (Monday) was a rest day for the "Elites" as the Juniors were under way all day with their Individual Race. 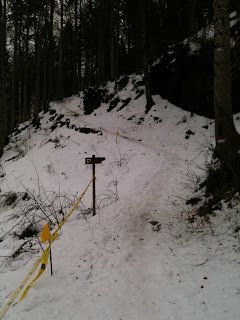 Finish Line for the Juniors today 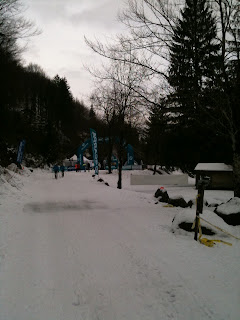 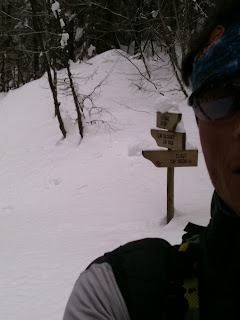 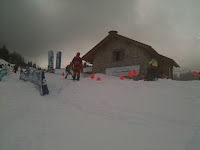 Chris Kroeger having some fun cheering on our Junior racer 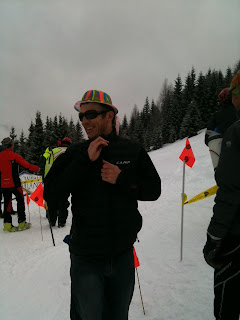 Our Junior racer Mat, who lives and trains at his boarding school in Switerland 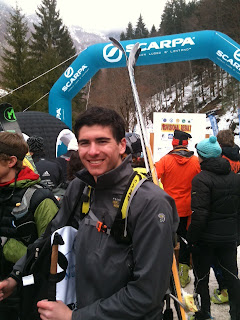 Some of the team at the Finish of the Junior race 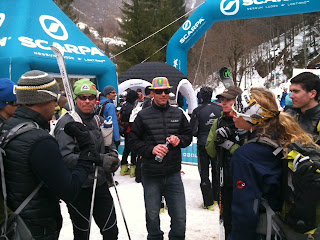 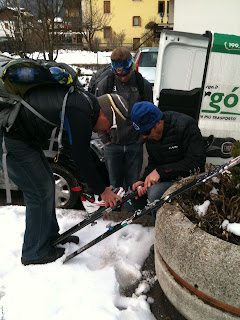 The food is not too bad....eat pasta, ski fasta!
Posted by Team Crested Butte at 5:00 AM