Today (Wednesday) was the first ever Sprint races held at the World Championships.  They are a new discipline for Skimo racing as the sport figures out how to get more "spectator friendly" for an Olympic effort in 2018. 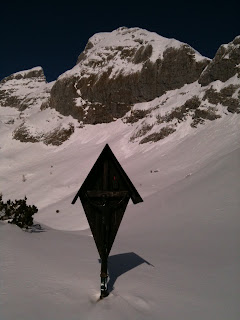 It consists of a skin up, to a few switchbacks, to a boot pack, to a skin, to a skin rip for the final DH through some GS panels and the finish.  Total vert. today was 300 ft over about a 4 minute course.  All the action (due to a lack of snow in Claut) was once again held at Piancavalle ski resort.

The US Men & Women (except for Nina who live in Chaminoux, France) racing today have never seen a Sprint race as they have all been limited to Europe this year.

To give you some feel for what the action looked like today here is a video of Pete Swenson and Luke Nelson in action today going from a boot pack to a skin.... (check back later as the internet is getting swarmed by 22 countries athletes...super slow uploads)


The only American to advance to the Quarter final round (after each athlete got to post their individual time) was Nina.  She ultimately made it to the Semi finals before getting outed.

This could have some good appeal for Town series style races as the action can all happen right at the base area...and ultimately really hones your skills for the sport....it demand proficient transition skill!
Posted by Team Crested Butte at 7:40 AM