The fifth stop on the Colorado Ski Mountaineering Cup was held today at Monarch Ski Resort.  Its only about a 45-70 minute drive for most folks from the Gunnison Valley so there is always some good camaraderie as most of our friends make the effort.  I have to say Gunnison/Crested Butte really is a driving force behind skimo racing in the US...and why not we boast some of the best back country skiing, so its no wonder "we" are nearly always on the podium!

Monarch sits literally on the Continental Divide, and with a start elevation of 10,790ft you can go into oxygen debt just getting out of your car....poor tourists!  Luckily most of us live and breathe at 8,000- 9,000ft so we are used to it, but it still hurts when the gun goes off. 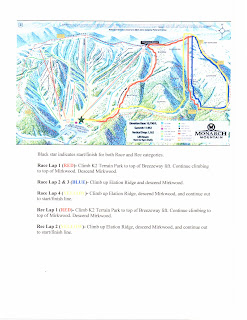 With an 8AM start and temps in the mid teens and sunny skies the lead pack flew up a groomed run to for about 12 - 15 minutes.  At this point we left the groomed terrain and headed up another 300 vertical feet  topping out at Mirkwood Basin.  This would then serve as the same descent for all four downhills on today's course  (see map below).

Reaching the top first for the men was Marshall Thompson, Pete Swenson, Travis Scheefer, Bryan Wickenhauser and Brian Riepe.  The skin rip each time at the top was made extra difficult due to the 20-30 mph sustained winds on the exposed ridge.  To fold your skins properly you really had to pay attention and "play the wind" correctly.  The top women were also from Crested Butte with Janelle Smiley topping out first followed by Stevie Kramer.

The descent down Mirkwood was fast & furious with supportable, wind hammered crust up top off the cornice, and soft chunky pow down low....it took most elite racers about 35-60 seconds to get down the 600 vertical feet to the transition.

The climb up followed an off piste skin track that had a good back country feel to it. The skin track was soft so some finesse was necessary to negotiate it.  Race division did this climb three times and each time as you neared the ridge it was a reacquaintance with the winds, as they were relentless!!

The men's podium wound up being Travis Scheefer 1st, Pete Swenson 2nd and Bryan Wickenhauser 3rd.  Marshall Thompson & Greg Ruckman, unfortunately got lost on course or they could have figured in on the results.

The women's podium was Janelle Smiley 1st, Steve Kramer 2nd, and Jamie Falcon 3rd.  Jari Kirkaland sat this one out due to a mid week crash and was giving her shoulder some time to heal or she certainly would have been in there too! 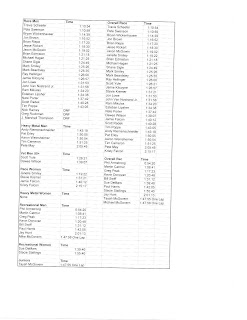 Once again Thanks to Kevin Krill for the great photos!  ....and Nate at Salida Mtn Sports for making the event happen.

The COSMIC Series takes a break for the Skimo World Championships which start this Saturday in Claut, Italy.  We will be blogging daily starting this Friday so stay tuned.
Posted by Team Crested Butte at 9:04 AM