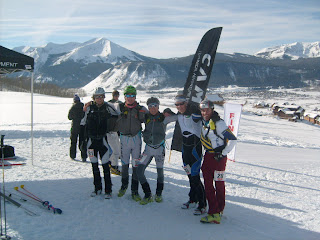 The first COSMIC event of the season was an all-backcountry, sold-out (limited to 50 entrants) success at CS Irwin Lodge outside of Crested Butte; Bryan Wickenhauser and Jake Jones promoted an "instant classic". A foot of overnight snow made for last-minute trail breaking and some nice powder turns and straight-lining on the descents. Brian Smith of Gunnison took the men's race followed by Jan Koles from Czech Republic. On the women's side Sari Anderson of Carbondale (who snowmobiled to the event) got the win ahead of Breckenridge's Monique Merrill. We were privileged to have Xavier Fane and Kevin Krill shooting the event - their pictures tell the story and are here:

Thanks to all of you for your part in supporting the COSMIC series - we're growing significantly this year and the turn-out, quality of the equipment and depth of the field is encouraging for the series and the growth of skimo racing in America. Up next on January 15th is The Heathen Challenge (also a US SkiMo Team qualifying race) at Sunlight Mt. Resort. Hope to see you there.
Posted by Team Crested Butte at 2:58 PM